The end of the story!

Marc Soon Joo Yee November 28, 2013
Today is the day that I would end mine story. It start when we first time met (going to be 2years) met in somewhere that we cant even expected that called AuditionSea . When the time I met "that person" , I cant denied that I love to chat and it doesn't make me like you from the start. So while we keep chit chat,I usually never ask for people number especially "gal" but I did that. Unexpected "that person" did give me ~

We do share a lot of things especially food because "that person" like to eat... :P I still remember the time I started making website, I did something make everyone that involve LOL.. Basically, we sending more time often on-line to know each others.

There is a lot of stuff that happen among us in past few months. I did regret what I did. At least I did , not everything is definitely wrong. A lot of mine friend told me to stop before it really in deep but I refuse to listen to them.

But now I think I do understand why they told me so previously. On past Monday,  I really cant believe what I have heard from mine friend. I try not to believe it but I couldn't. It feel terribly annoying till I really could't stand it.

I did want to do a surprise for "that person" but eventually it fail. Actually, I did know that it will be fail but at least I did try myself before I conclude it.

I really want to thanks friend that really support me from the start of mine plan till today. I know it could weird to ask them to help me because this is not their problem but they never say anything or think about it and eventually they helping me instead of saying NO. I do appreciate that I have such friends that willing to help me when I needed them. Even though the last person never help me , I never blame "that person friend" because ''she" know her friend well than me. I do respect her choose :) . And also thanks to a person that helped me in introducing her friend to me ~

Before I really end this story, I would like to thanks especially Jia Zhi, Wei Kean and Kok Hwa in term of chatting on our experience together and give me a lot point of views . Besides, Jia Wei in of helping me on getting back mine confidence back. Moreover Zul, Spacie, Vivi and Joelle in term trying their best to success the event that I wanted to do.

Thanks to all the friends that knows what I trying to do and support me~ Sorry that I fail to your guys this time!><

It really not an easy task to plan a event that have a lot of parties in different country, religion, culture and so on. I really did my best on every part and I fail on the last part. I really want to say sorry to 4 persons that I just mentioned at previous paragraph, all the hard work that you guys try put toward me already become "blank".

Even thought I not perfect guy but I already try myself to be. It seem there is no fate! Before I end this story, I hope "that person" will get someone that will take care and happy always.

Here is the screenshot that I during the first time we all test this new thingy. :P 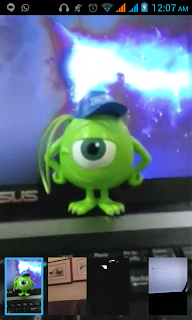 Guess who is who in the screenshot..hahahahaha. Really enjoy that time we test this video together :)